The gluteus medius is a broad thick muscle on the outer part of the pelvis.Ā  The muscle spans from the buttock to the upper aspect of the thigh bone (femur) on the bony part of the outer hip (greater trochanter).Ā  The primary function of the gluteus medius is to stabilize the pelvis and femur during dynamic activities such as walking or performing a deep squat.Ā  It is responsible for preventing the opposite side of the pelvis from dropping during walking.Ā  The gluteus medius packs many short muscle fibers together.Ā  This allows it to generate high forces.Ā  However, a trade-off to its structure is its inability to produce large forces when in lengthened positions. 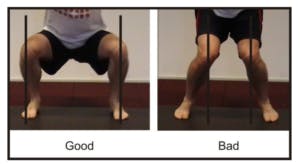 The gluteus medius is lengthened when the hips flex and internally rotate.Ā  This causes the knee to cave inward during the squat.Ā  This may be more obvious during a 1-leg squat or landing from a jump on one leg.Ā  This movement strategy is sometimes called, dynamic valgus, and is believed to be disadvantageous. Ā Ā The gluteus medius is unable to accomplish its primary role of stabilizing the pelvis when in extreme joint positions.Ā  This is the case when the hip is in flexion and internal rotation.Ā  Hip internal rotation during the squat also impairs the ability of the gluteus maximus to extend the hip. Ā However, the hamstrings and adductors can often overcome this deficit to compensate.Ā  Squatting with the hip internally rotated increases the demands of the gluteus medius and may be a compensation for the weakness of this muscle.

It is commonly believed that squatting with hip internal rotation or dynamic valgus is indicative of hip weakness.Ā  This is particularly thought to occur in those with knee pain and those at risk for anterior cruciate ligament (ACL) injury.Ā  Other injuries which are characteristic of this pattern include runnerā€™s knee, iliotibial band (ITB) syndrome, labral injuries of hip and femeroacetabular impingement of the hip.Ā  In many cases, this pattern is likely a compensation for the weakness of the hip musculature.Ā  Hip internal rotation may increase the force capacity of the weakened gluteus medius.Ā Ā  This allows for performance of the squat but subjects the knee and hip joints to excessive stress. 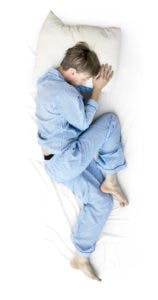 Gluteus medius weakness can be the result of previous injury or lifestyle factors.Ā  Standing with the body weight predominantly on one leg with the pelvis swayed sideways can lead to an underdeveloped muscle on one side.Ā  Sleeping on oneā€™s side with the top leg flexed and crossed over the other leg results in an elongated muscle.Ā  Both of these scenarios can potentially weaken the muscle over time.Ā  Repeated running on crowned roads or surfaces can also potentially lead to weakness of the gluteus medius on one side.